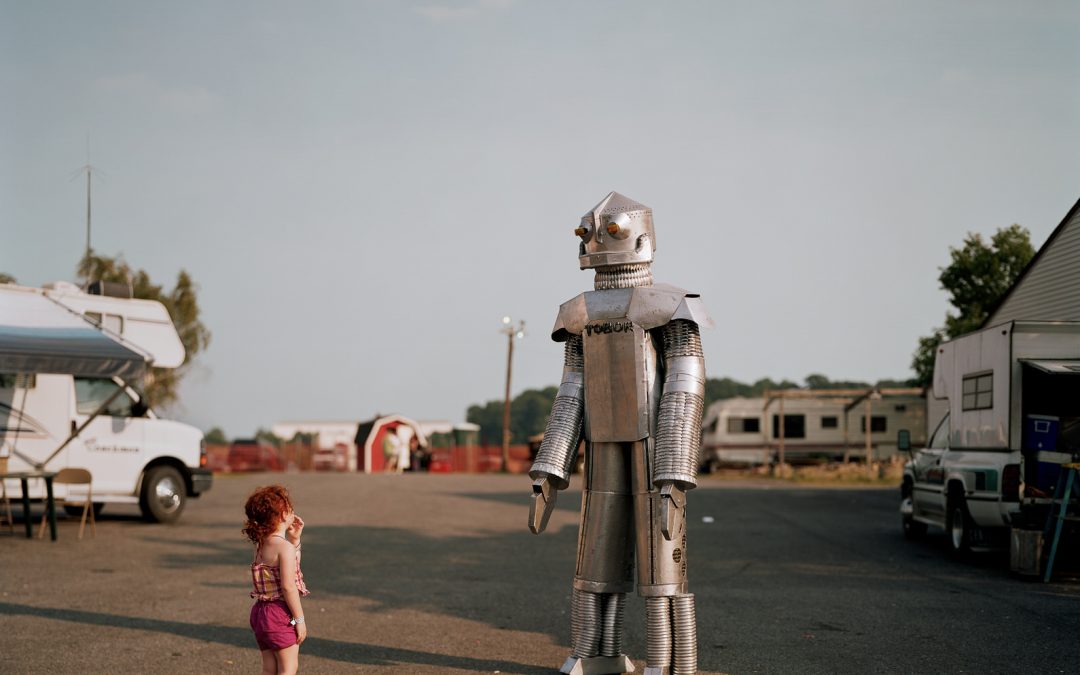 In Today’s Interview, we want to show you the incredible work of Greg Miller. He is photographing mainly on analog large format cameras and is a master when it comes to capturing surreal and interesting moments.

Please introduce yourself in a few sentences

My name is Greg Miller and I have been a photographer for a long time. I started photographing in high school when I was 15 years old, and now I have a 15-year-old daughter who is in high school who loves to take pictures! (if you are still wondering, that was 35 years ago). Since then, I am honored that my pictures have been printed on the cover of magazines and hung in museums. My favorite camera with which to photograph is a wooden camera on a tripod. To focus, I have to use a black cloth over the back of the camera. As a photographer, I love to look at people, but because I use this camera, I have also gotten used to people looking at me. 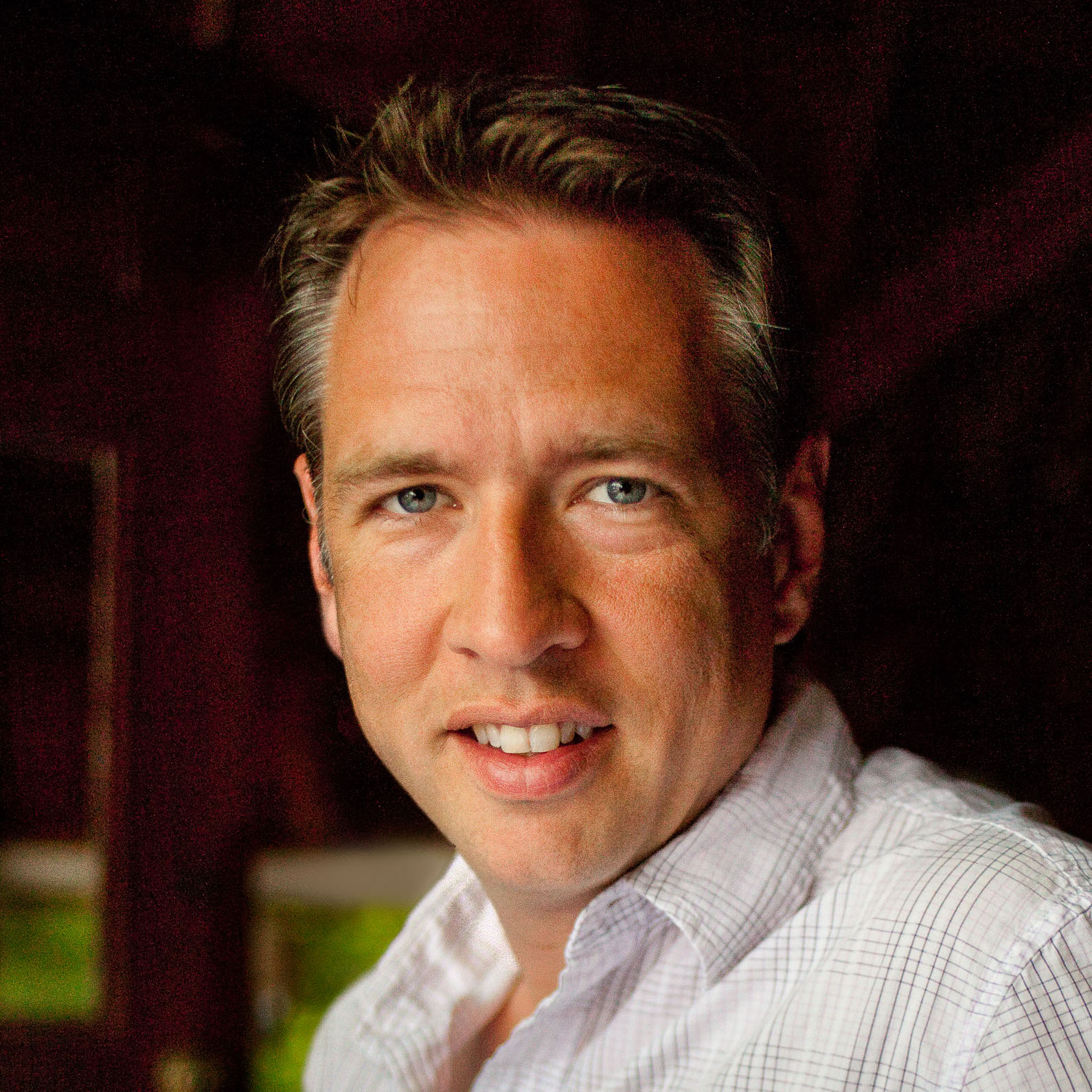 How did you get into Photography?

I grew up in Nashville, Tennessee, and started taking pictures for my high school yearbook. The following year I became the editor-in-chief. All of that gave me lots of opportunities to take pictures as well as make mistakes. I loved photography so much that the mistakes, while not fun, didn’t stop me. I decided to go to New York City to study photography. While I was still in college, I started photographing for magazines that actually paid me to take pictures. That was a wonderful feeling. I felt like I had made it! 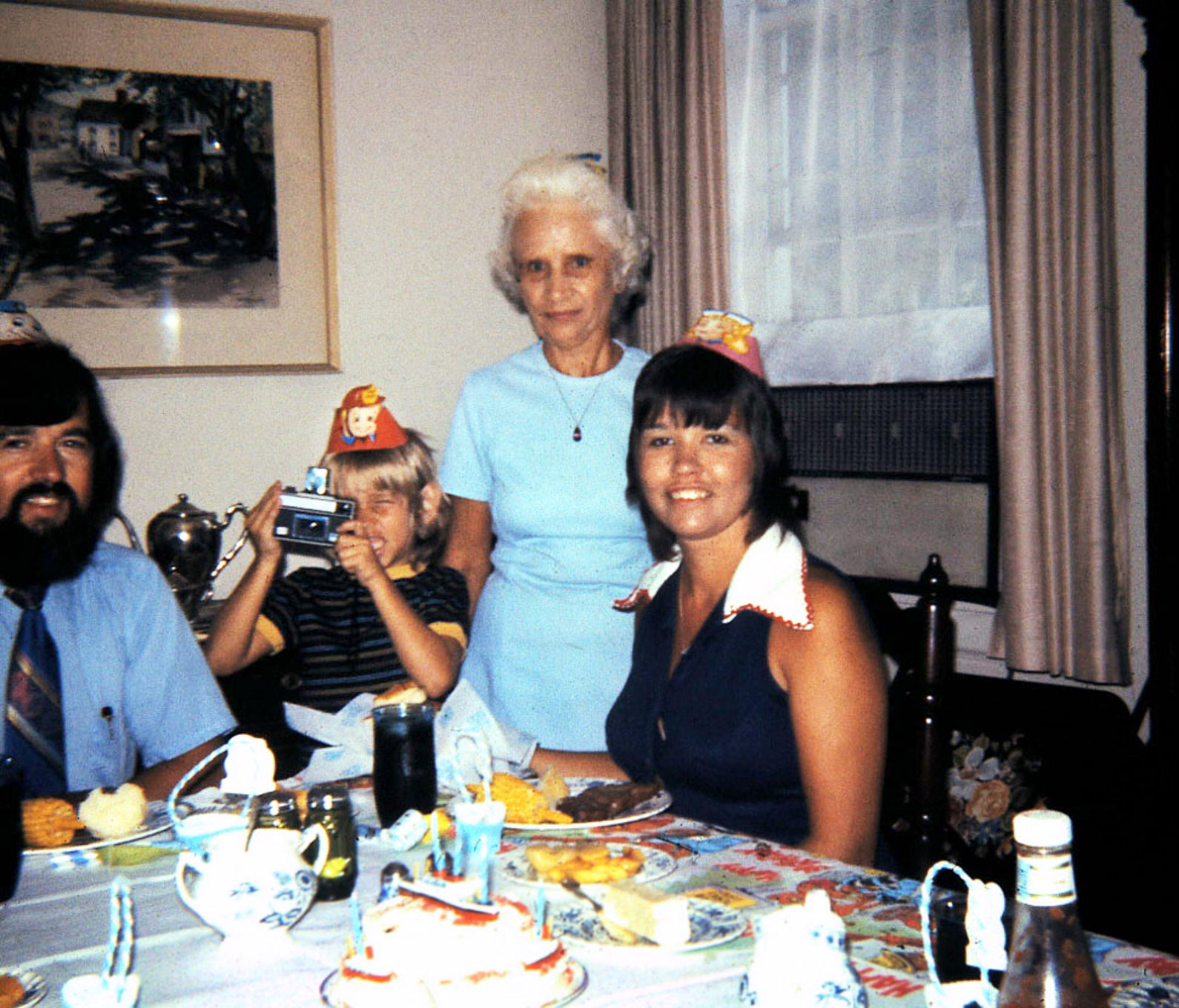 When did you take your very first photo, and what was on it?

When I was a kid, my grandmother took me on a day trip to Memphis, TN. I borrowed her camera and excitedly made some photographs. When she got her film back from the fotomat along with her snapshots of the trip, there were a bunch of pictures of garbage cans. She handed them to me and said, “I think these are yours.” 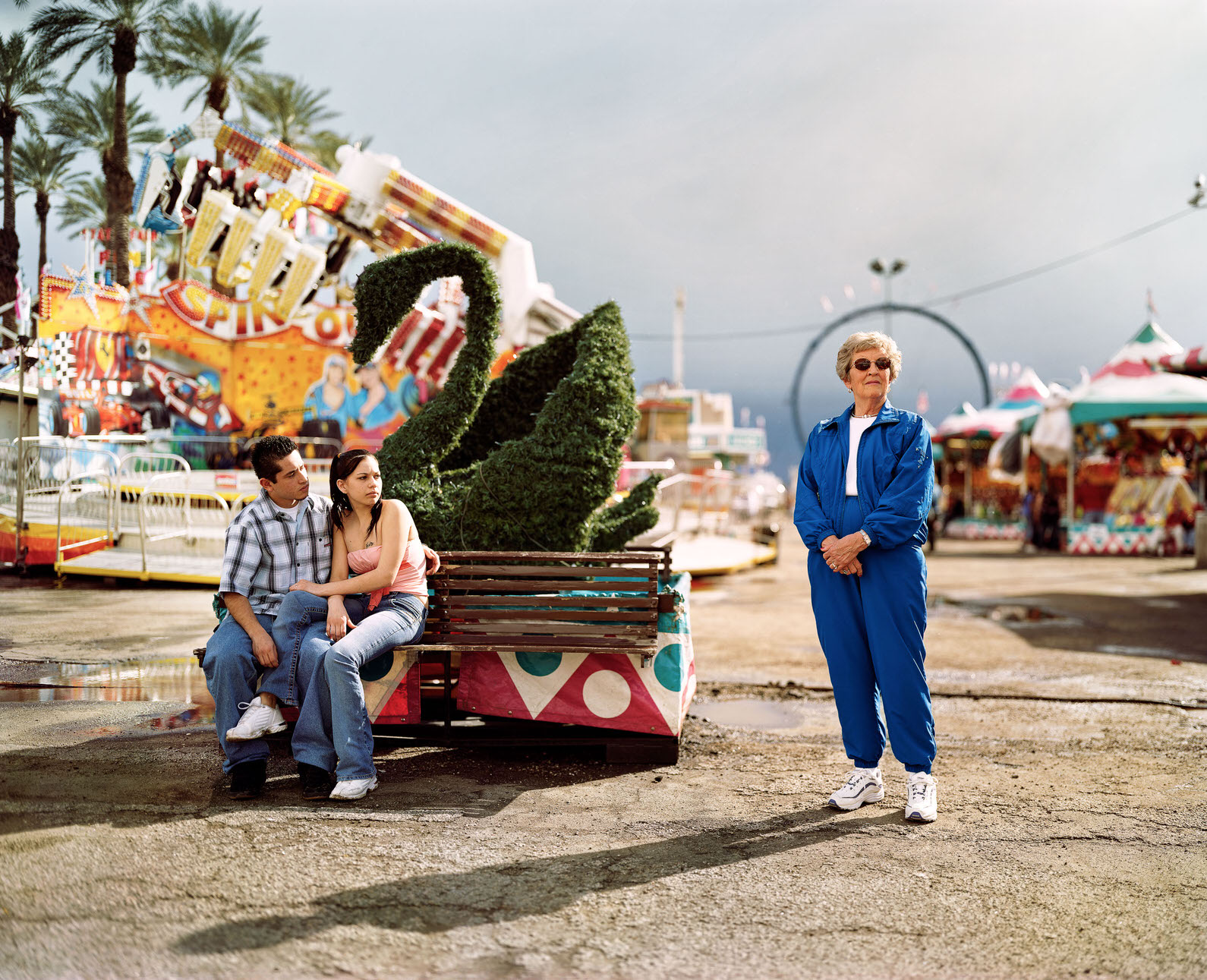 Are there any particular techniques or places like websites that you use to get new inspiration?

I get ideas from all sorts of places. I subscribe to a daily email of our local news which has things as mundane as the weather but also news of the day. Often there is nothing there, but I will make a note of anything that might be the smallest trigger for an idea. It helps me to get a sense of what we are all experiencing. I like to ask myself questions, “How does this make me feel?” or, “What am I taking for granted?”

Have you ever noticed how it is really easy to take pictures on vacation when everything is new: the plane, the hotel room even your own family looks different on vacation. But when we come home we tend to stop photographing what is around us because everything feels the same. What if you looked at your home as if you were visiting it for the first time? What would you notice? What would surprise you?

Another trick that is a little advanced, is to ask myself, “what am I avoiding?” I like to ask myself this when I am really stuck. Often there is something blocking me that I don’t think I can do, or I just don’t know how to do it and I just stop. To ask myself, “what am I avoiding?”, it puts that thing front and center and forces me to give it my full attention. I like to think that I am giving that my love as if it was a crying child in a room of children. If you saw a child crying you wouldn’t ignore them, you would give them your full attention. Art is the same way. We must give it more love even when you feel like it could possibly need more. 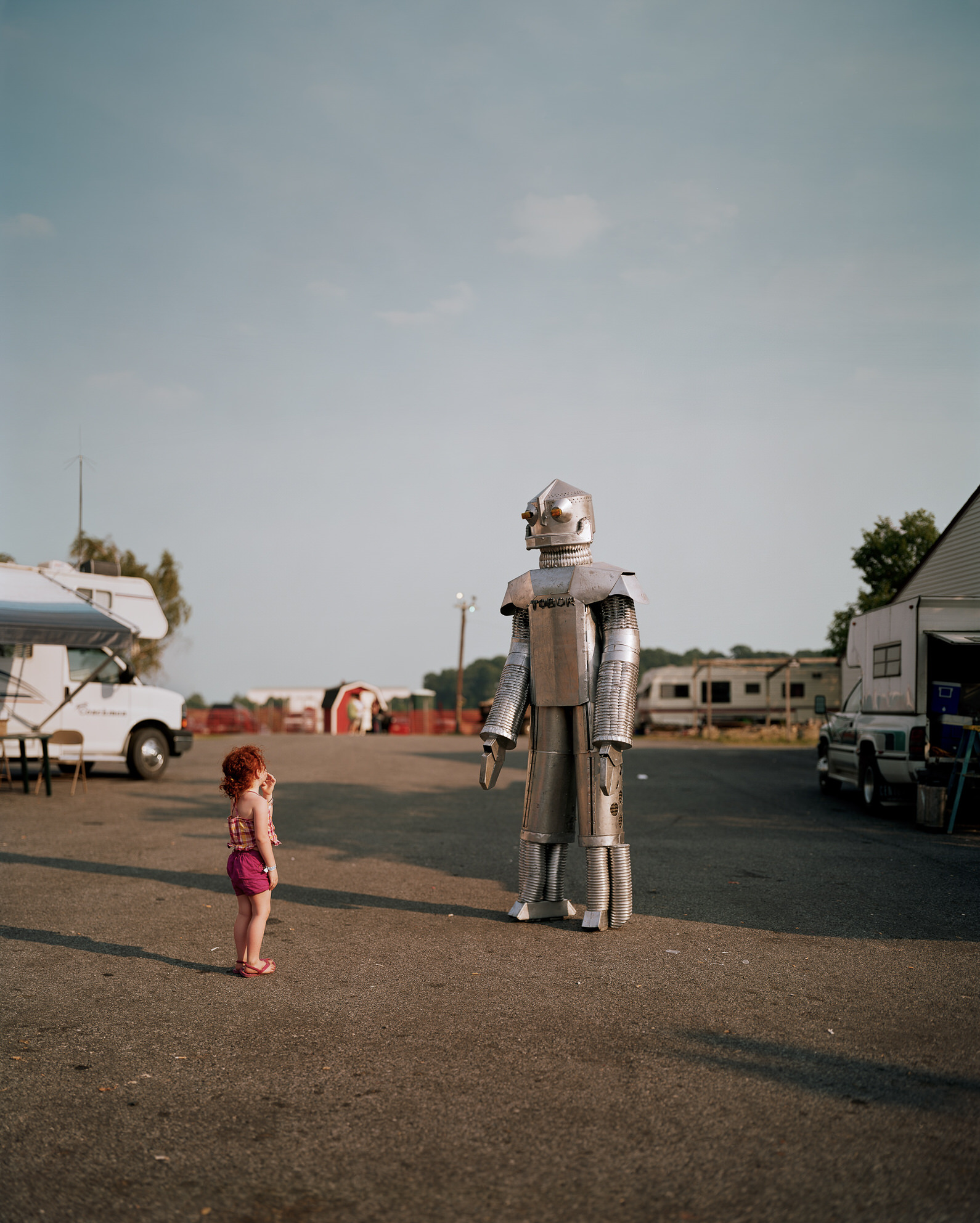 What makes a good photo for you?

This is a great question. The definition of a good photograph is so mercurial. It will never stay fixed in one place as we are always in motion and always changing. For me, right now, I love a picture that is a mystery, it tells me a story, but not the whole story. On the other hand, I love the picture of my wife and daughters on the lock screen of my phone. At another time, I might have kept this picture in my hat or my wallet. That picture is a connection to my heart.

A photograph by definition fixes a frame around a small part of the world. There is a whole lot of world outside the frame, but what we leave out of the picture is what gives power to what’s in the picture. If there is not enough or too much information it ruins the picture. A good picture has just enough information to make us keep looking at it. 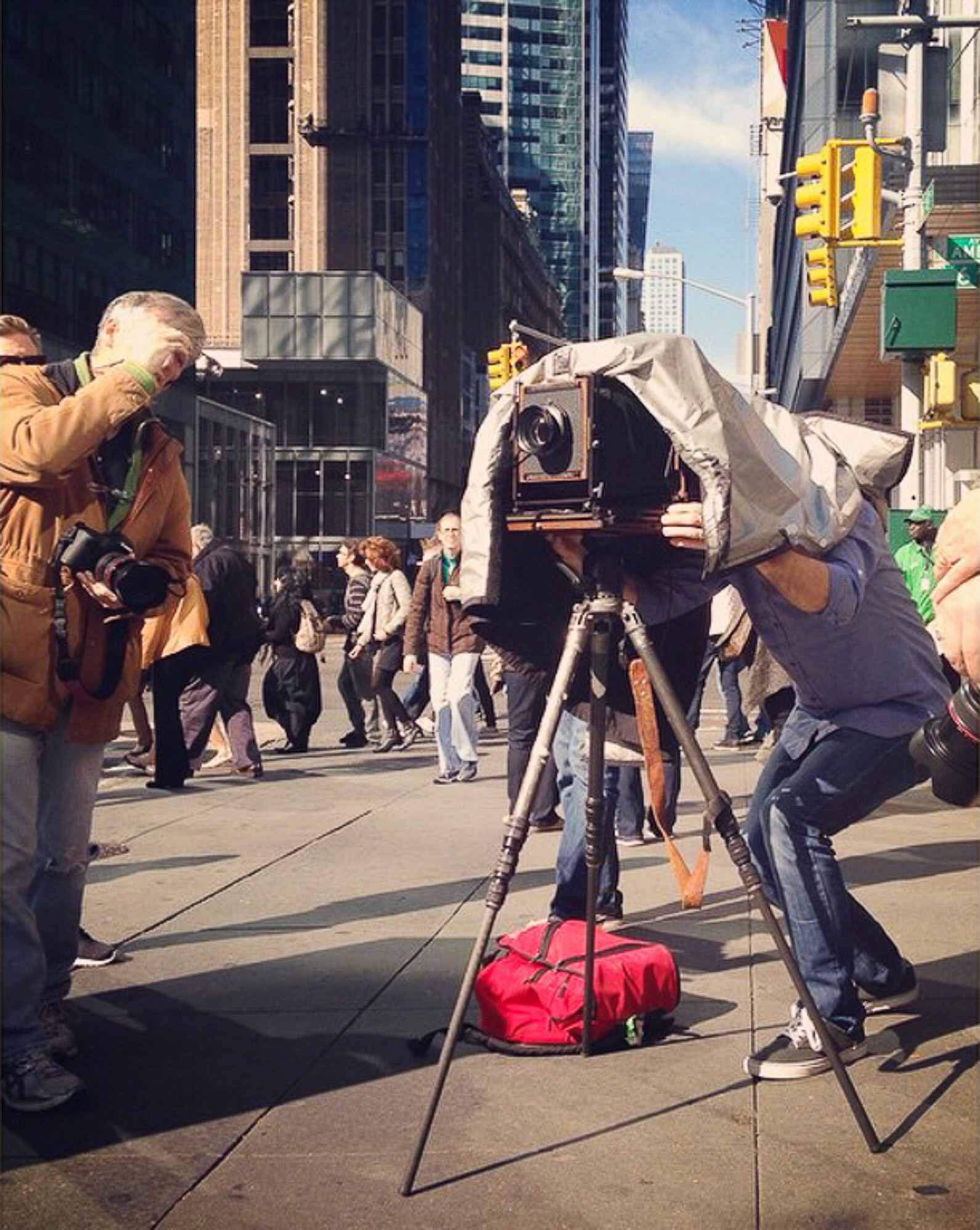 How important is the equipment when taking photos?

I prefer to use an antiquated camera that was obsolete at the beginning of the last century, so I could see how one might think that equipment is important to me. And certainly, without a camera, there would be no picture. And while I love certain cameras the way a guitarist might love certain guitars, I actually don’t like to spend a lot of time thinking about equipment. Even though a camera is involved, it is about how I see the world. Without your optical nerve, your brain would never get the signal that your eye is looking at the love of your life. When was the last time you thought about your optical nerve when you looked at a beautiful flower? 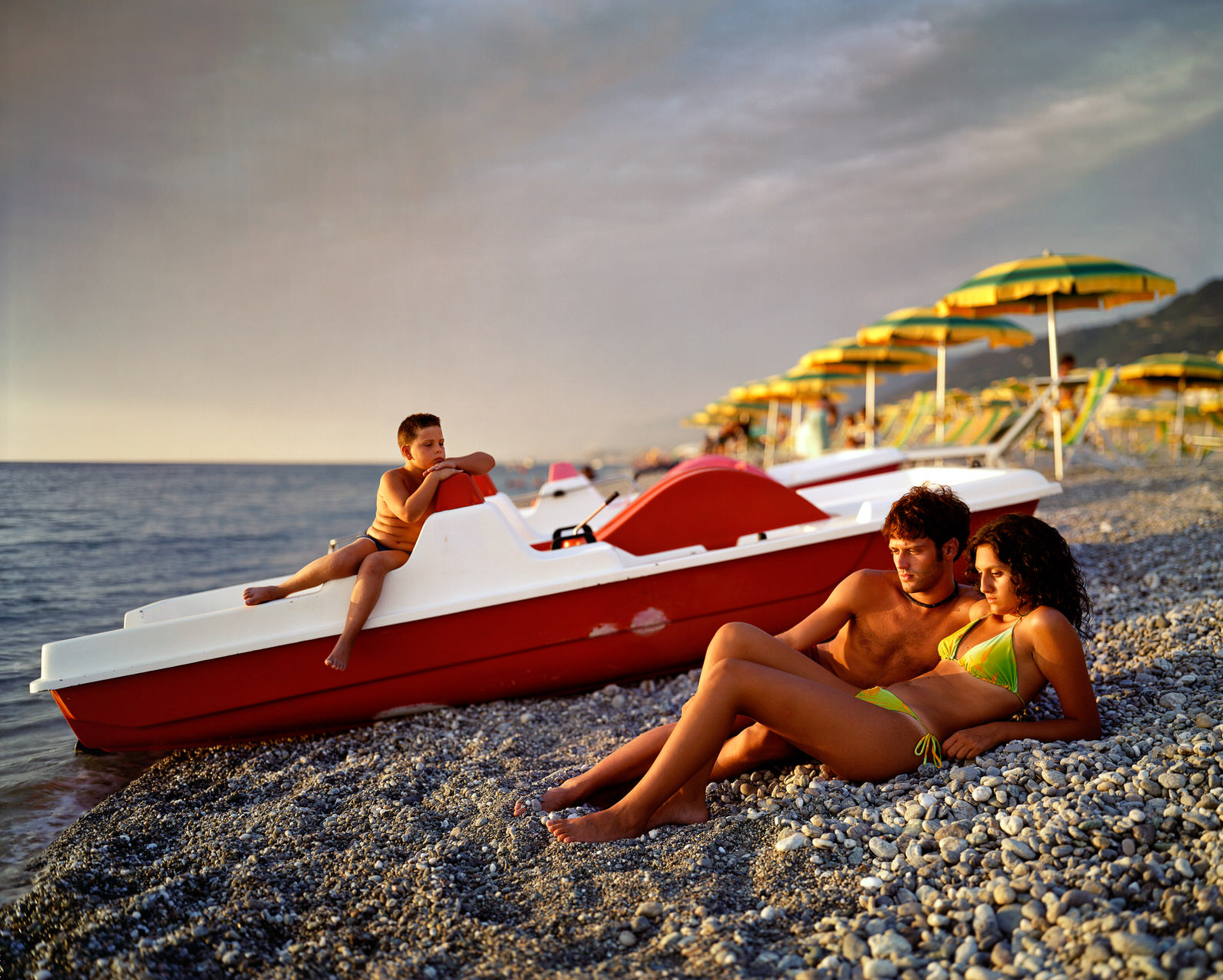 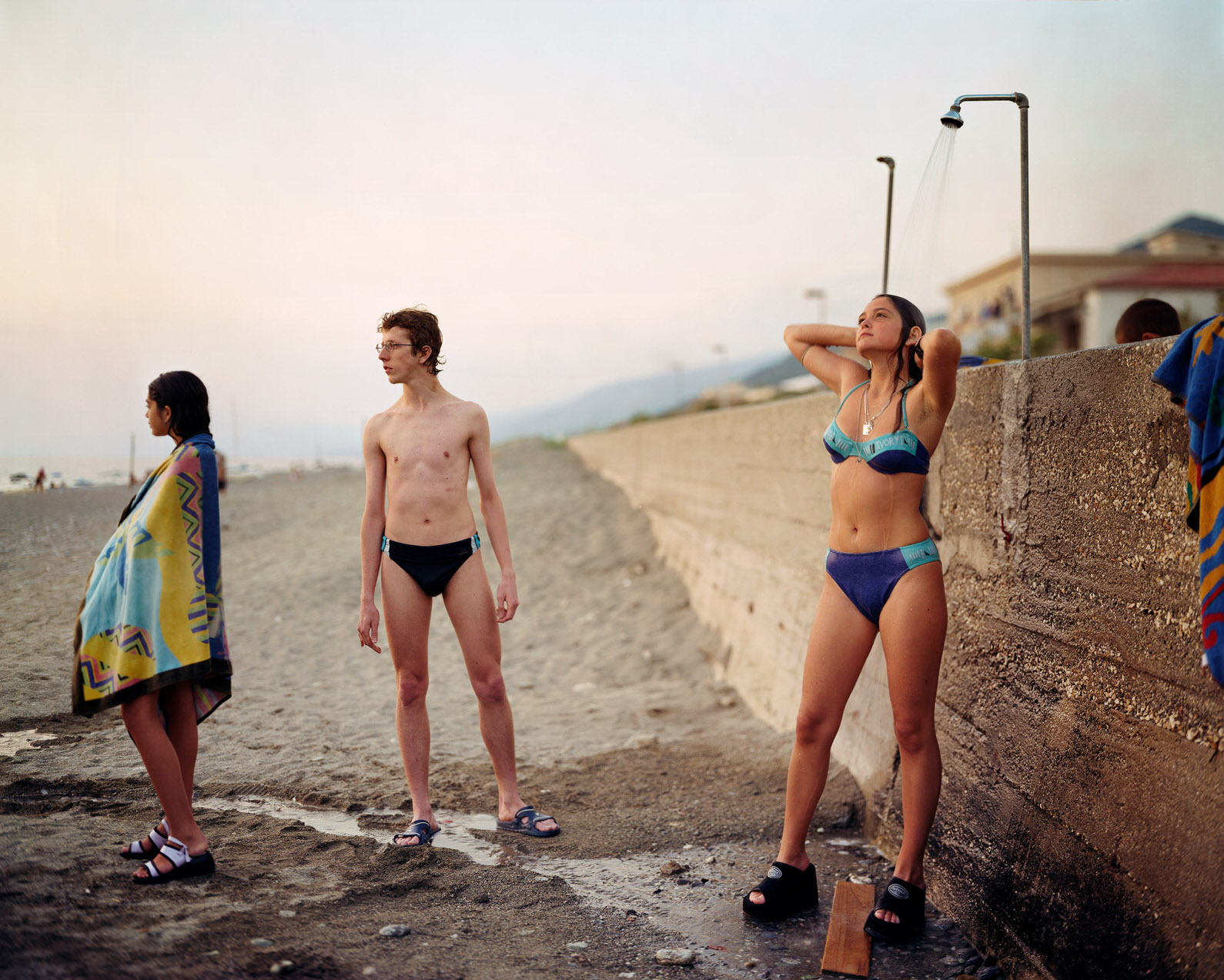 Except for a camera and lenses: What’s important for you when you go out to take photos?

I photograph a lot of people. It’s my favorite thing to photograph. The irony is that I actually don’t like to be photographed myself very much. For this reason, I go to a lot of effort to talk to people before I take their picture. Not so much because they are uncomfortable (people love to be photographed) but because I think I need to make sure they are comfortable for me to be comfortable. Another way of saying this is that I like to make sure they feel safe. Feeling safe is something we totally take for granted, but it is one of our most basic desires. When a person looks at my pictures it might look unsafe, but I couldn’t have made the picture without everyone feeling safe. 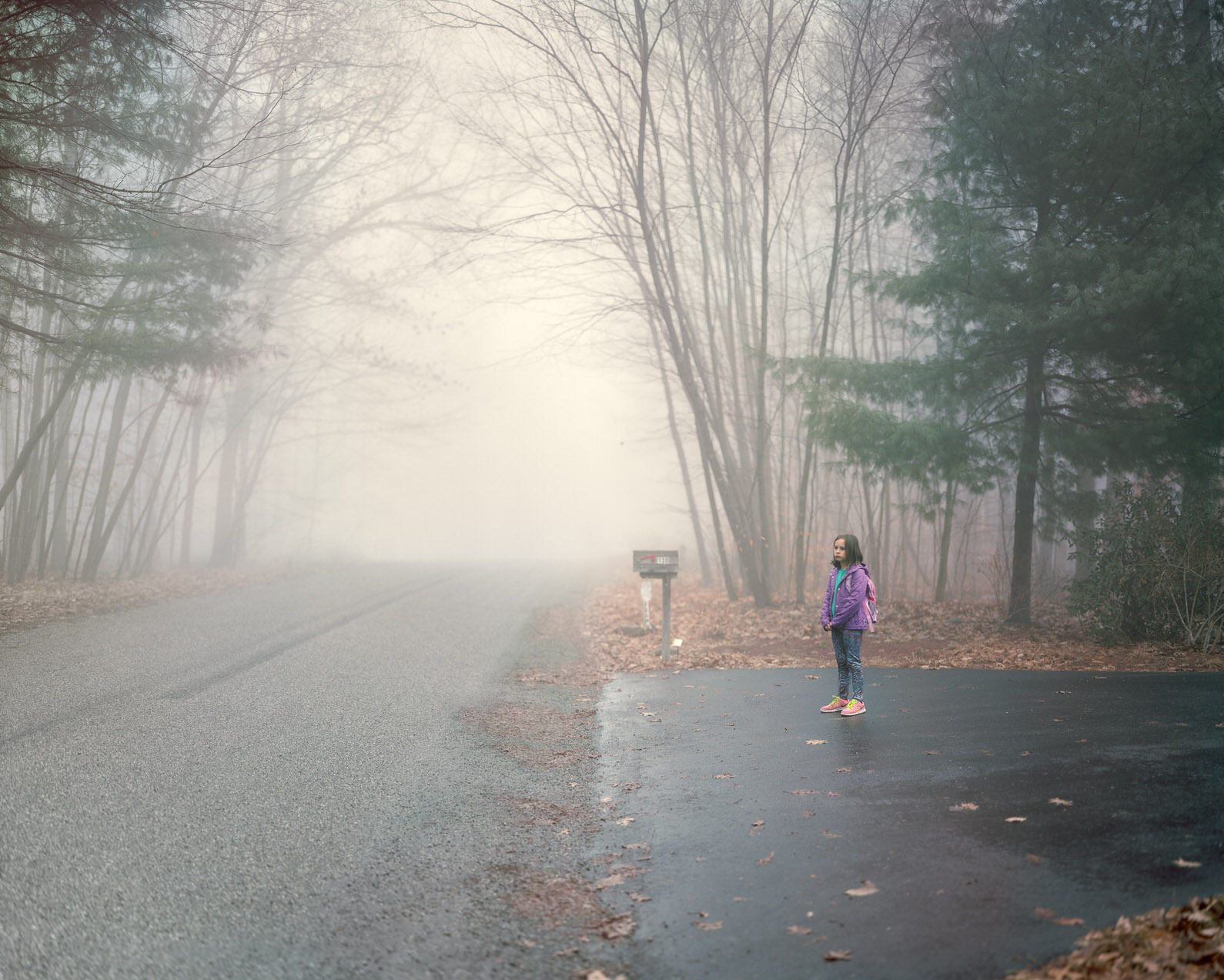 Gioia, 2013. From the series Morning Bus

Which photo or photo series are you particularly proud of?

I think I would have to say that I am particularly proud of my Morning Bus series. I live with my family in Northeastern Connecticut in the US. These photographs are of local children waiting for the morning school bus to pick them up to take them to school. I started this project in response to a school shooting that occurred about an hour from our home in Newtown, CT in 2012. My oldest daughter was 6 at the time of the shooting, and inconceivably, the same age as many of the victims. Sending my daughter off to school, even for a few hours, had forever changed for myself, my wife, my neighbors and I believe for parents around the world. I felt and still feel powerless to stop the epidemic of gun violence in the United States. 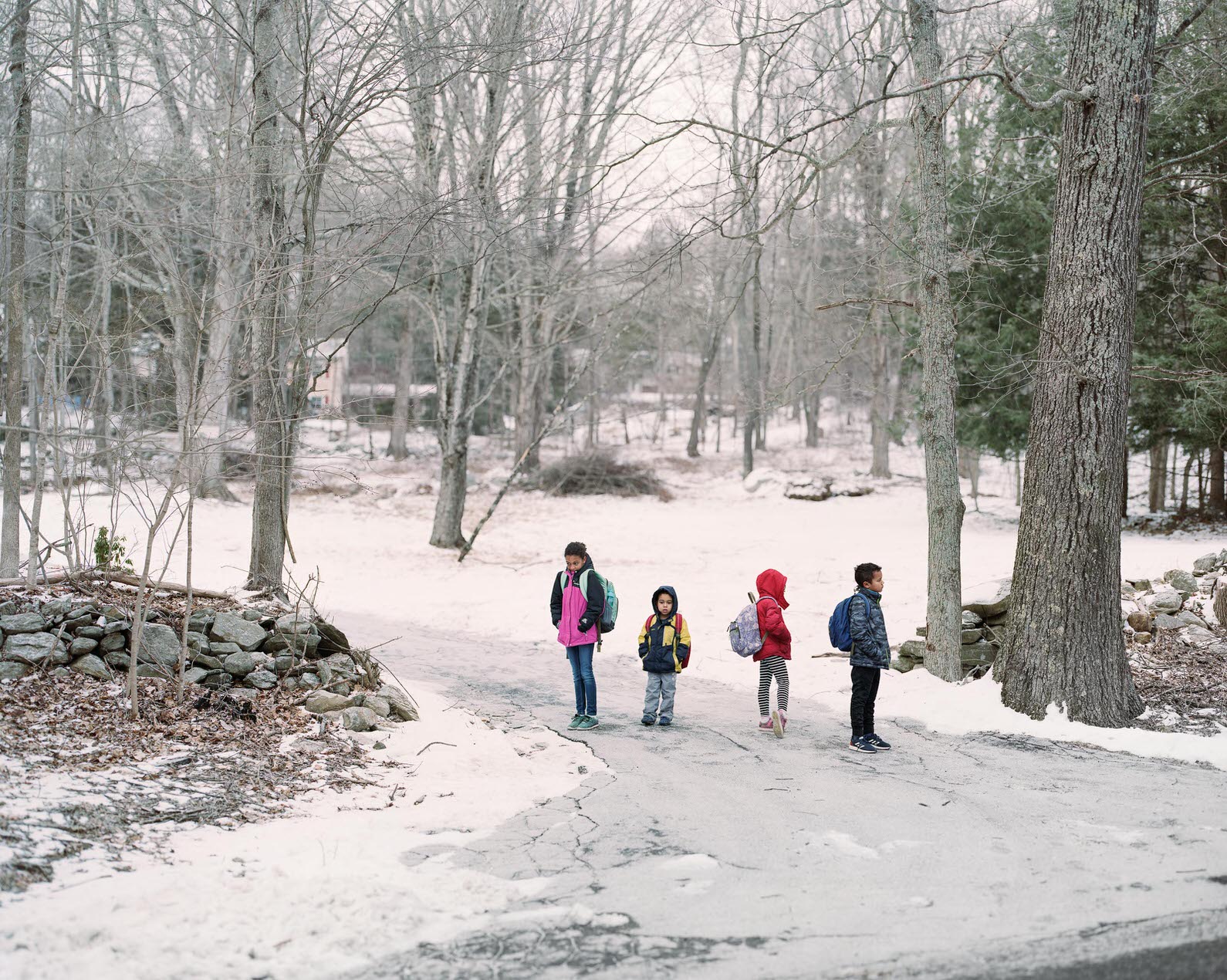 Kwesi, Amanda, Ayine and Kyosi, 2019. From the series Morning Bus

I first photographed my own daughter waiting for the bus in 2013, then I asked our friends and their kids if I could photograph them, then friends of friends. I have been photographing ever since in hopes of publishing a book. I intentionally situated the camera at a distance so that it looked like the children are alone (even though their parents are often off-camera). My intention is that this distance elicits a feeling of concern in the viewer. The idea that I might need to humanize children to a public that loves gun ownership more than human life is not lost on me. 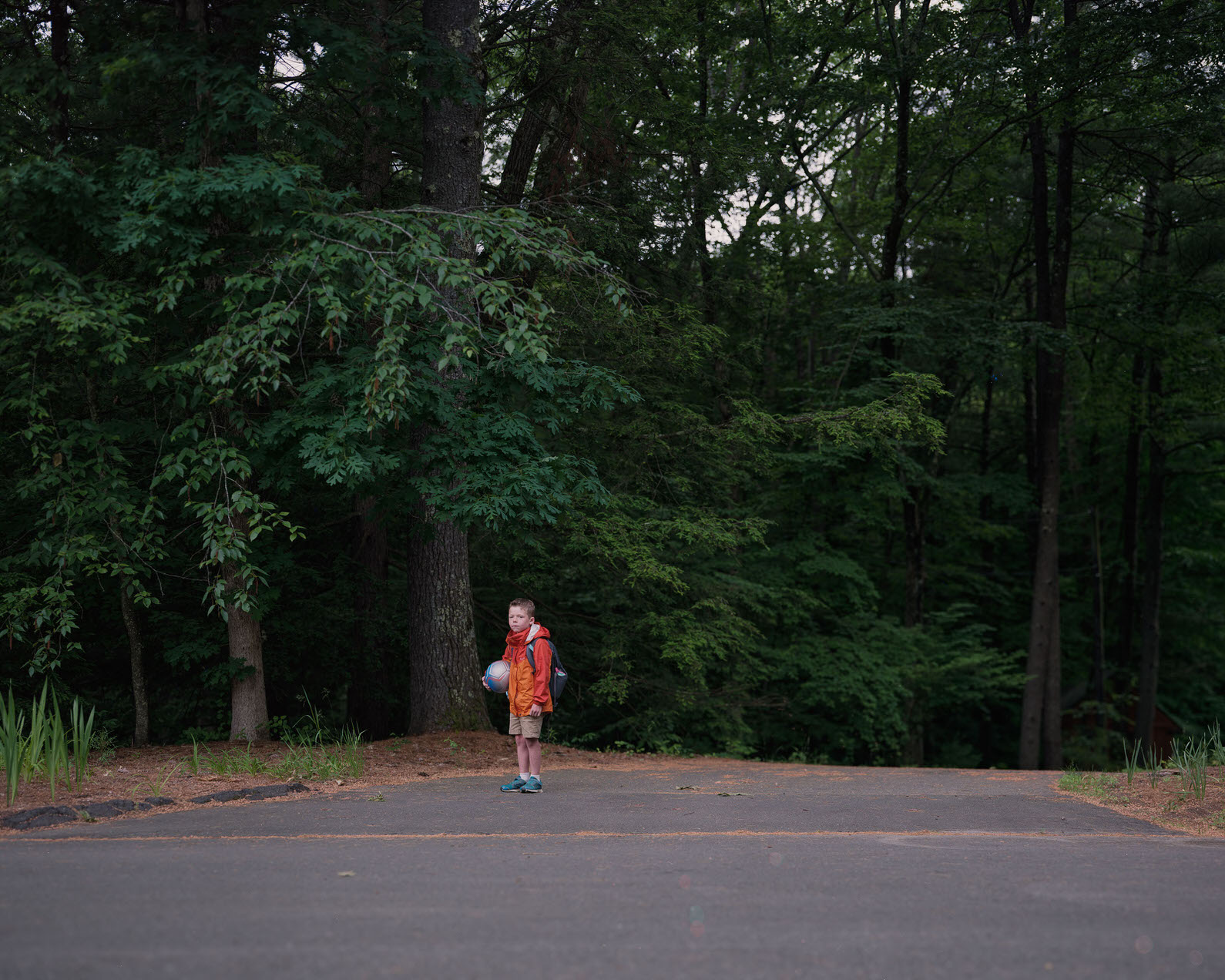 Aiden, 2019. From the series Morning Bus

While this project was conceived out of helplessness around a political issue, these pictures are also just children waiting for the morning school bus, a near-universal rite of passage for school children in the US if not around the world. I couldn’t have made these pictures without the cooperation of many parents and children in my community and have so much gratitude for their contribution. 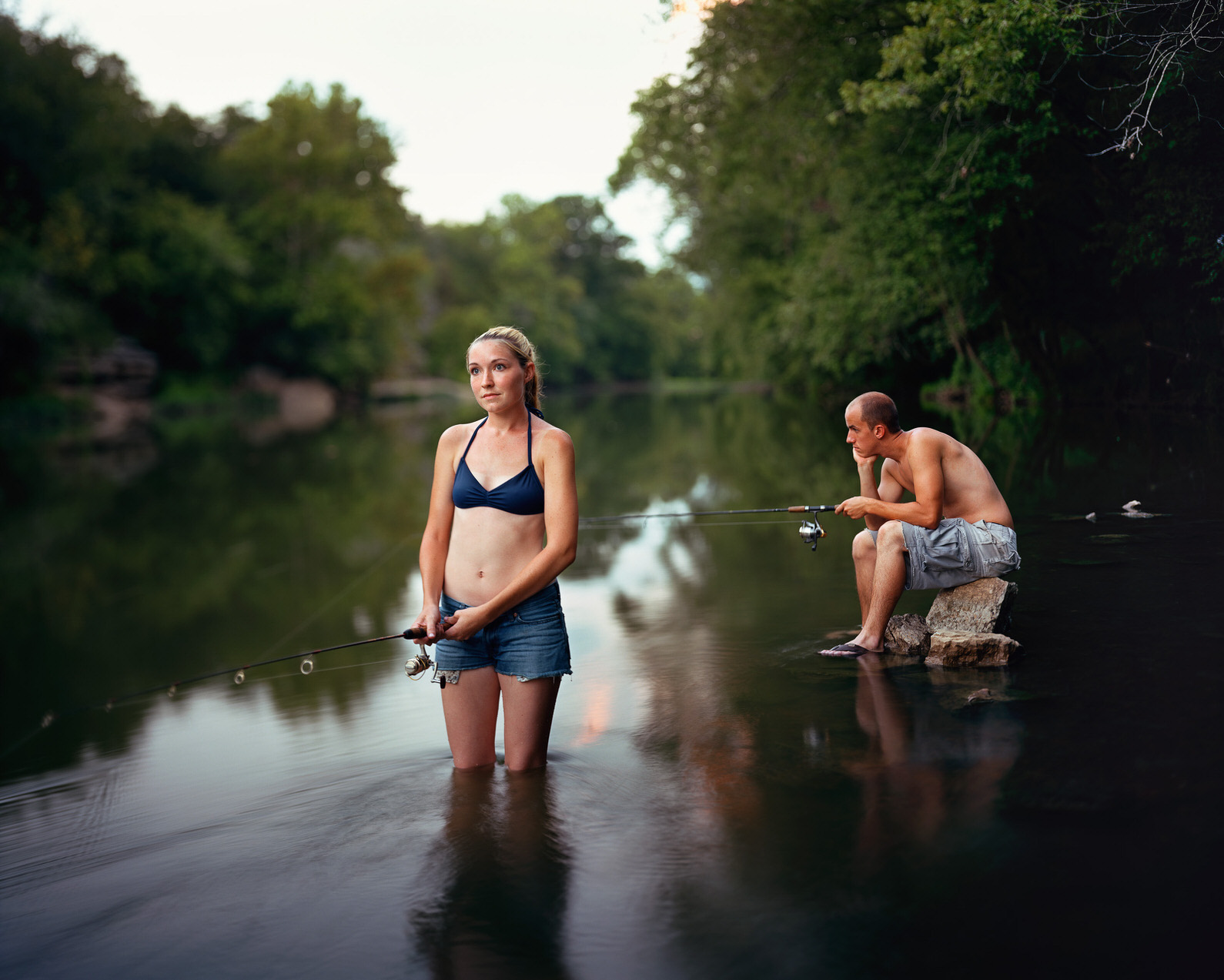 Duck River. From the series Nashville

There’s a somehow surreal element in many of your photos. How much of that is staged and how much is purely candid?

Because I use a large-format camera on a tripod, everyone you see in my pictures is aware of me. It’s kind of the opposite of spontaneous. I consider myself a fine art photographer more than a documentarian or journalist. So my pictures are not moments “caught” in a traditional sense. Having said that, I love captured moments, frozen in time, as much as anyone. Pictures that are meticulously staged feel wooden and boring. After I have introduced myself and described to my subject what I want to do, I will often wait for a picture the way one might wait with a small camera. The feeling is one of being off balance. That’s when I know I might have a picture. Since there is an interaction with my subject, yet they are not looking into the camera, I understand that some could see this as a deception but to me, this is still a moment like any other. My hope is that it is still a good picture even after the viewer is aware of the subjects’ participation. When I look back over my pictures over the years, I am filled with gratitude that people have so willingly given me their time. Consent is a big part of it for me. To those that are disappointed to find out that I talked to everyone, I often want to ask, “would you have preferred that I made the picture without their permission?” 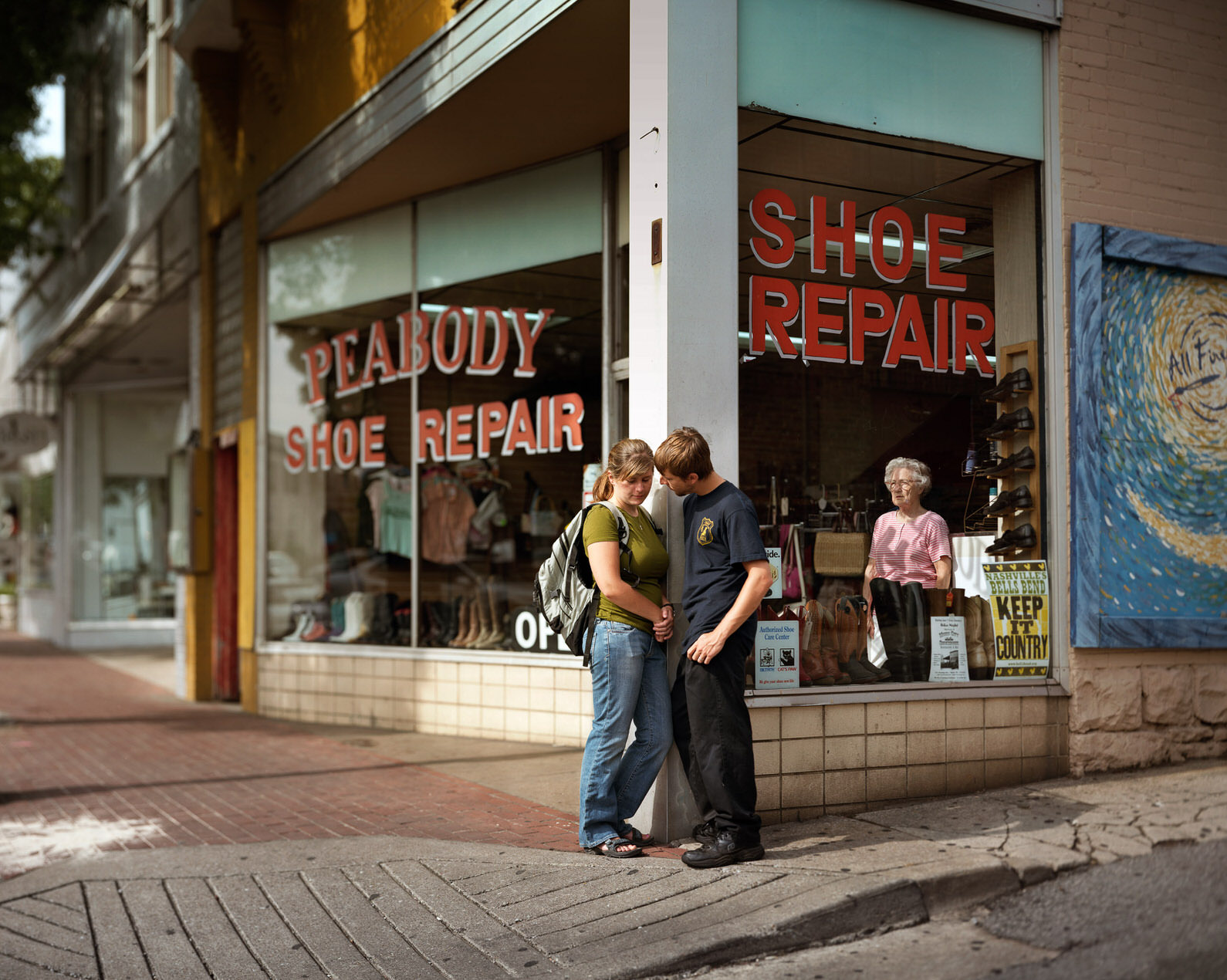 One Word – your thoughts 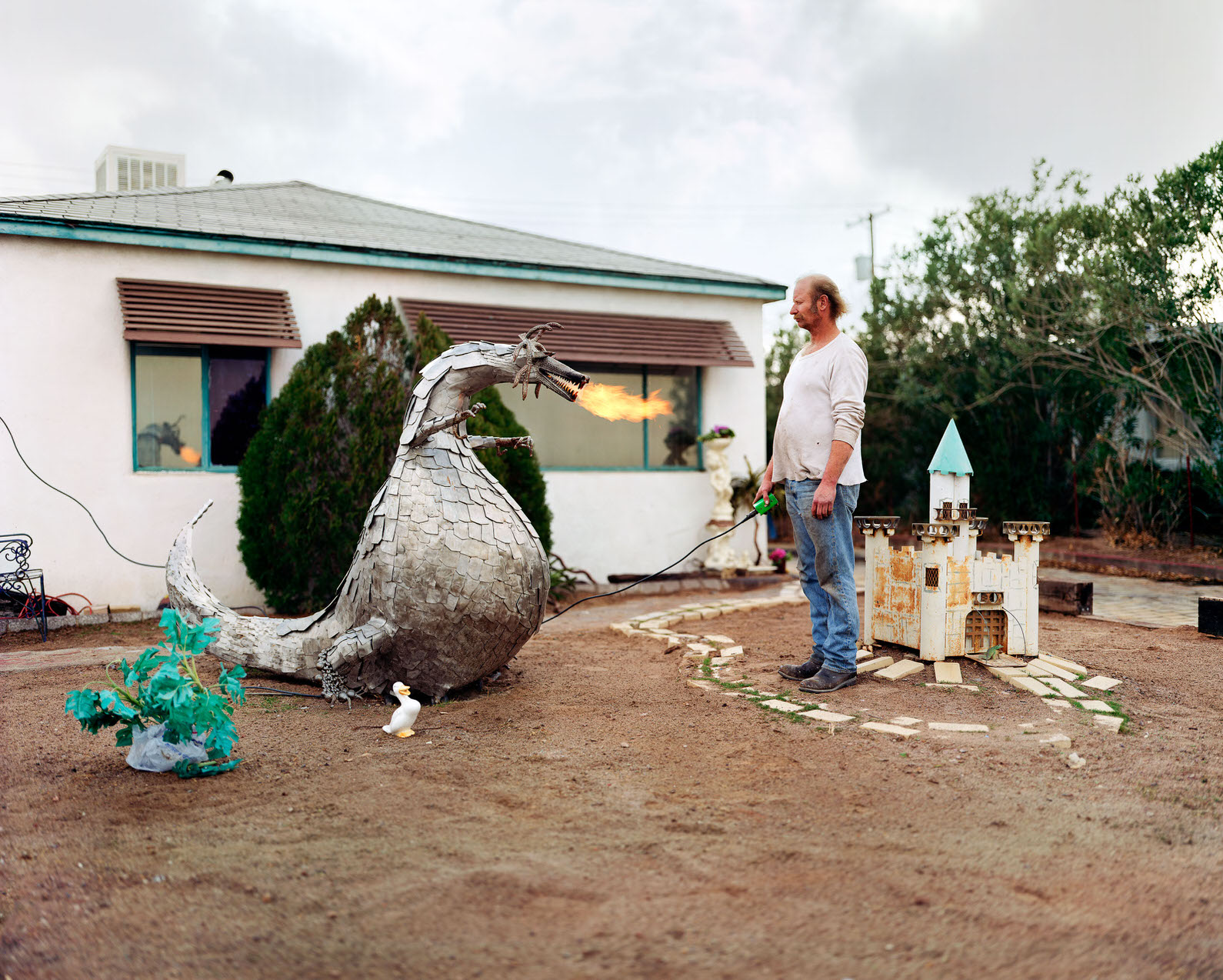 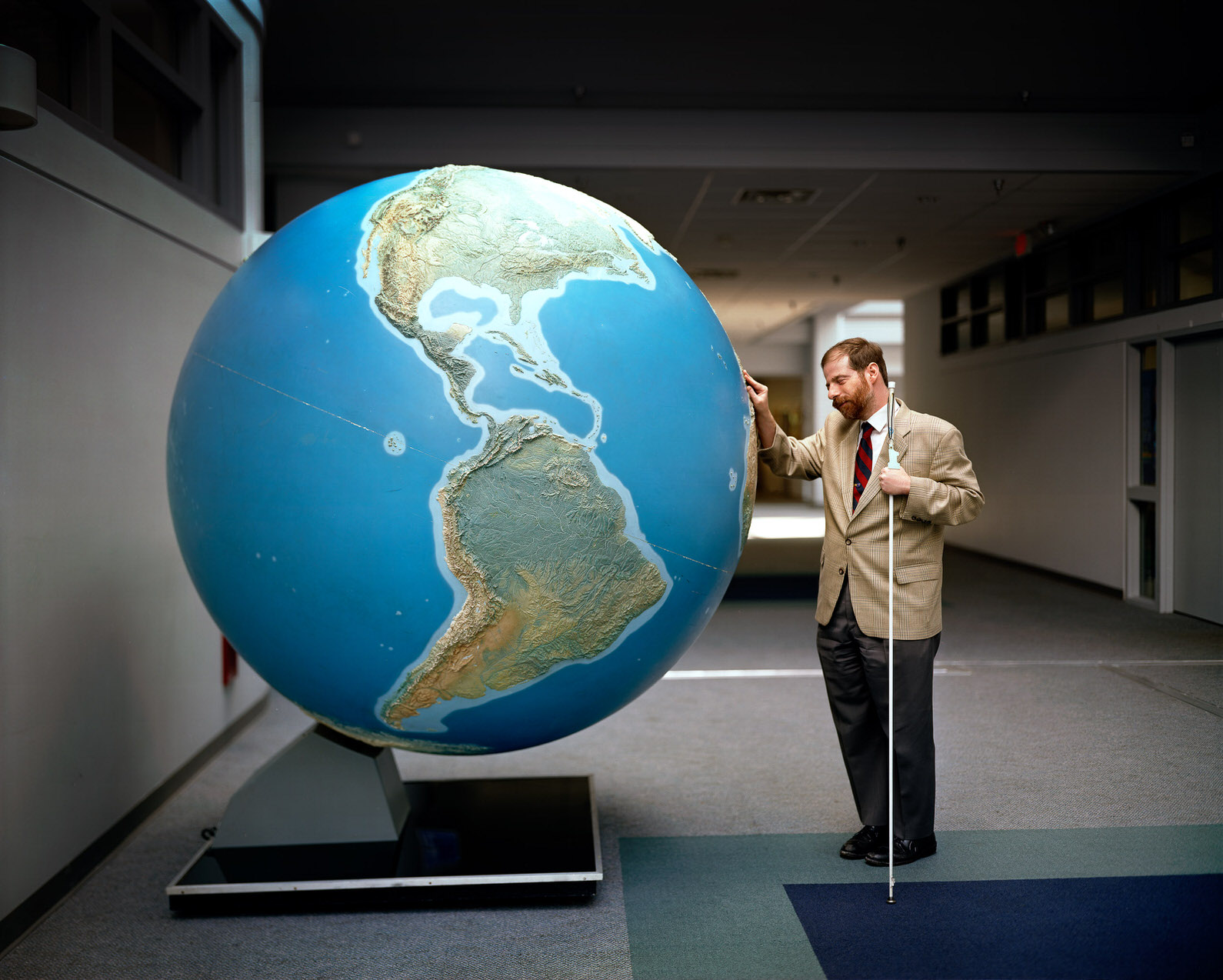 Thank you for the interview 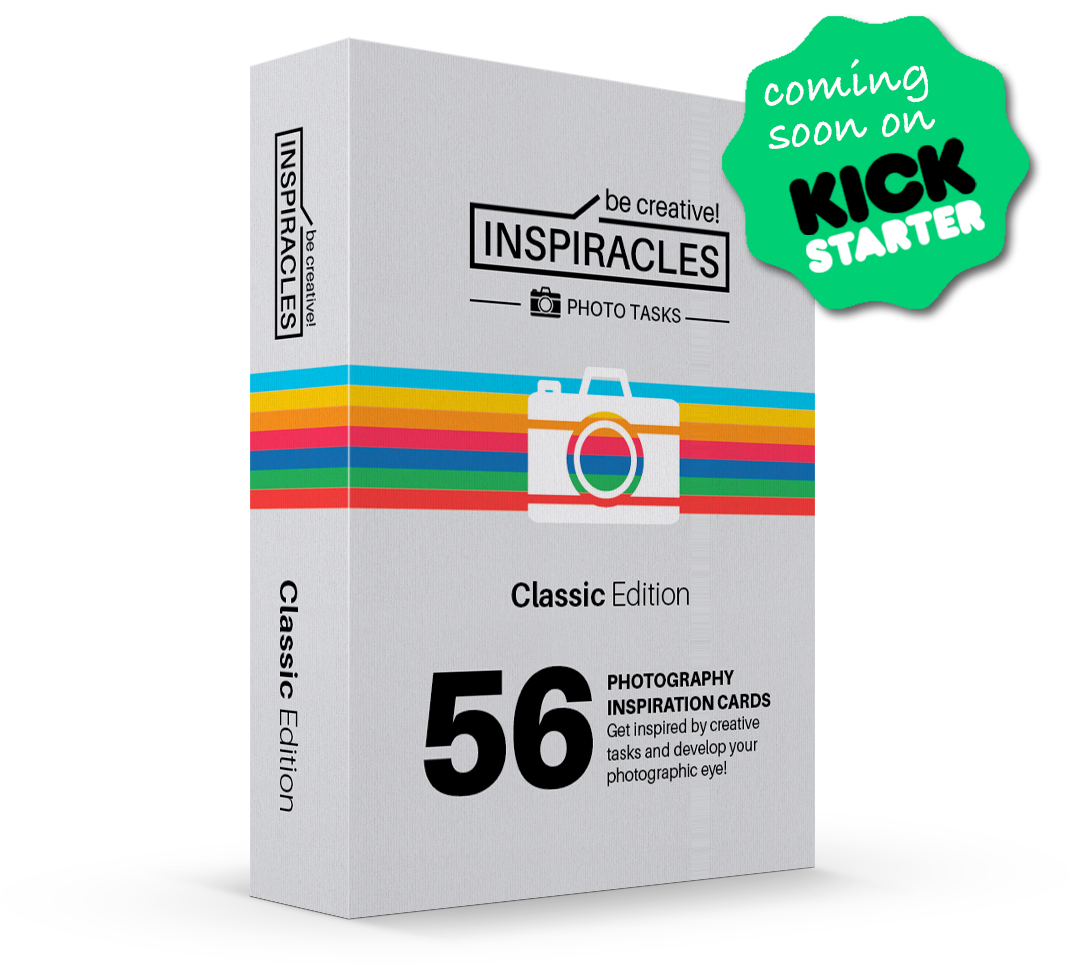